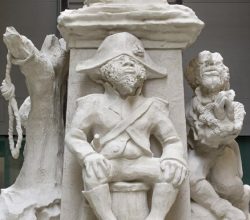 Kara Walker is having a moment in London. There is a survey of her acclaimed films that deal with slavery in America’s Antebellum South. A newly commissioned sculpture looks, at first glance, like British Empire bombast. Closer inspection shows it to contain figures that speak to Britain’s colonial past – “playful and inviting, yet brutal in its core.  A video (4 min) is here.