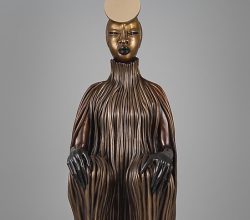 How Kenyan-Born Artist Wangechi Mutu Is Taking Over the Met

The façade of New York’s Met has four niches intended for sculptures. Empty for over a century they are about to be filled with part African, part futuristic female figures, cast in bronze. This is a signal gesture for an august institution attempting to connect with “the new and the global”. With a forgivable touch of exaggeration, the writer declares “an institution founded on … a Eurocentric view of culture is being turned on its head.”