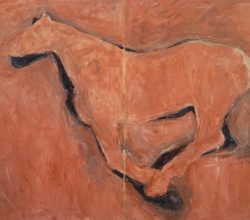 For her first show in 1975 Rothenberg produced figurative works … of horses. It caused a sensation in abstraction–obsessed New York and launched her career. But why horses? They didn’t come from an art theory idea, just her intuition. A reviewer of Rothenberg’s just-finished show comments that her horses are like cave art, “fundamentally ambiguous”. Ascribing meaning is the viewer’s task and as Rothenberg noted, “they getcha or they don’t.”