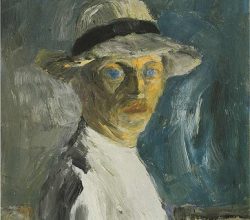 Let the record be clear. Nolde’s anti-Semitic views are well known. His defenders hasten to add that the Nazi’s deemed his art “degenerate”. Perhaps he wasn’t really a Nazi. New research, supported by the Nolde Foundation, reveals his long, full throated support for Nazism. Hitler’s dislike of his work led to its inclusion in the notorious Degenerates exhibition. Himmler, a supporter, had the works removed after one day.