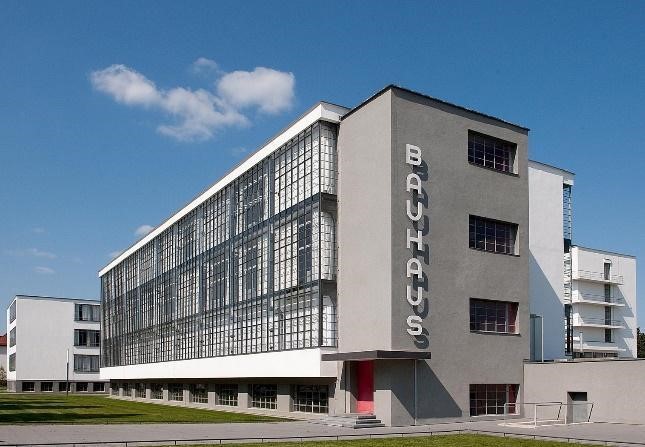 2019 marks the 100 year anniversary of The Bauhaus. In honor of this anniversary, I will be publishing three essays exploring the history of The Bauhaus. This is the first. We’ll move more or less chronologically starting here with the early history of the school. The second essay will explore the middle period, as Bauhaus – now a set of ideas and some key individuals – left Germany and moved into western Europe and then America. The final essay will treat the later years of Bauhaus up until the present.

There is no concise answer to the question ‘what is Bauhaus?’ First it was a school with a specific curriculum in art and design. Later, it became a style and a movement and a look (geometric, elegant, spare, modern) that could be found to greater and lesser degrees in art, craft and architecture all over the world. But in retrospect, I think it is fair to say that Bauhaus was always an attempt to fuse the craft and aesthetic ideas of a pre-modern age with the realities of 20th century industry and technology. Bauhaus wanted to find out how materials like concrete and steel and glass could be beautiful and could be shaped and designed in such a way as to serve the aesthetic needs of humankind. In this, Bauhaus was very much in the spirit of the movements that preceded it, like Arts and Crafts and Art Nouveau. But Bauhaus went further than any of those movements in its embrace of what we now think of as the Modern with a big ‘M’. Some would say it went too far.

The history of Bauhaus is the history of this debate – what is the proper relationship of art and design to industry and technology? 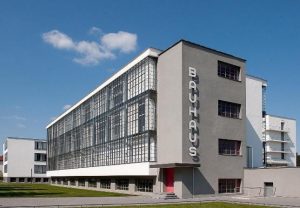 The biggest question when it comes to Bauhaus is whether the movement lost – or found – its way through the course of the 20th century. The beginnings of an answer to that question can be found in Weimar Germany just at the end of WWI. While the nation reeled from defeat in a ruinous war and the collapse of its aristocrat-based social order, a man named Walter Gropius sat down to write a founding document for a school of art and design.

In 1919 Walter Gropius penned a short document titled, “Bauhaus Manifesto and Program.” On that day, the Bauhaus was born. It was born as a school, a school where students would come and learn how to make things. The first line of Gropius’ manifesto reads, “the ultimate aim of all visual arts is the complete building!” This sentence is surprising for a number of reasons. Let’s start with the exclamation mark. Isn’t Bauhaus supposed to be a rather cold affair? Isn’t Walter Gropius supposed to have been a harsh and humorless advocate for the idea that architecture is tantamount to the design and construction of undecorated concrete bunkers? For those who have read books like Tom Wolfe’s angry and excoriating (and very funny) From Bauhaus to Our House, or any of the nearly infinite number of popular, scholarly and academic attacks on Bauhaus-style Modernism, the exclamation mark at the end of Gropius’ first sentence is disconcerting. It speaks of a passion and excitement and humanity that has little to do with our popular image of Bauhaus and the International Style of architecture and design.

In fact, the idea that Bauhaus is a strictly formalist and functionalist affair has little to do with its early history. Indeed, the phrase “form follows function” comes, actually, from an American architect named Louis Henry Sullivan. It’s a line from Sullivan’s late-nineteenth century essay, “The Tall Office Building Artistically Considered.” There is nothing in Gropius’ 1919 manifesto that comes anywhere close to the idea that form should follow function, that ornament is an enemy, or that formal simplicity is a goal in and of itself.

Gropius has one guiding obsession throughout his manifesto: that all arts should return to their basis in craft. “Architects, sculptors, painters, we all must return to the crafts!” he writes (and there go the exclamation marks again). “For art is not a ‘profession’. There is no essential difference between the artist and the craftsman. The artist is an exalted craftsman.” The second sentence of the manifesto reads, “To embellish buildings was once the noblest function of the fine arts; they were the indispensable components of great architecture.” The entire manifesto is much like the exclamation mark that adorns its first sentence. It is a document of enthusiasm, spirit, imagination and faith. It is a document wild with utopian ideals. This utopianism is tempered with a sense of history and tradition that was characteristic of the first decades of the 20th century. That’s to say, it is not a utopianism wishing to abolish the past in the name of a glorious future filled with glass and concrete. It is, instead, a harder-to-define utopianism that is as obsessed with pre-modern traditions of art and craft as it is with the new possibilities of the industrial age.

This tradition-soaked Modernism, if we can call it that, was evident in many of the writings of those who would be associated with the Bauhaus, like Wassily Kandinsky, whose “Concerning the Spiritual in Art” voices many of the same ideas that Gropius expressed in his manifesto. Paul Klee’s notebooks are in this same vein. The Blue Rider Almanac, put together mostly by Kandinsky and Franz Marc, reads like a sister-volume to the “Bauhaus Manifesto and Program.” Kandinsky and Marc, for all the radicalism of their early experiments in abstraction and non-representationalism in painting, filled the almanac (which was meant to be a kind of guidebook to their shared aesthetic sensibility) with copious examples of pre-modern art and craft.

“The artist is an exalted craftsman.” An exalted craftsman. There is an almost religious quasi-mysticism to this statement. This makes sense, since Gropius is here alluding to the medieval guild system in which art emerged from the years’ long, careful learning of a craft under the tutelage of an acknowledged master. And this guild system was, itself, tied to the production of art and architecture in the service, mostly, of the church. That’s to say, an institution with the purpose of shaping the souls of human beings. This, more than anything else, was the guiding image of what school would be like for students entering the Bauhaus. Students were to become excellently trained craftspersons imbued with a kind of holy mission to redeem modern life through a holistic approach to building and beauty.

This new vision for an art school was explicitly intended to combine knowledge of modern techniques for making things with a medieval attitude toward how and why you are making them. Gropius and his allies were going to save the modern world by shoving it as hard as they could both backward and forward at the same time. Here’s another line from the manifesto: “Let us then create a new guild of craftsmen without the class distinctions that raise an arrogant barrier between craftsman and artist!” I need not, anymore, draw your attention to the exclamation marks. But we ought to note the strange blend between progressive politics (abolish class distinctions) and fealty to age-old tradition (new guild of craftsmen). This isn’t simply a return to the medieval guild system. It is a return in which the previous distinctions and barriers will be cast aside. It’s a guild system in which everyone will do everything, and in which no hard distinctions or hierarchies will be recognized.

“Therefore there will be no teachers or pupils in the Bauhaus,” Gropius declares, “but masters, journeymen, and apprentices. … Avoidance of all rigidity; priority of creativity; freedom of individuality, but strict study discipline.” And all of this was supposed to happen in a party-like atmosphere of play, creativity, and experimentation. The Bauhaus was not going to be a place of stale learning. It was going to be more like a tight community of artists living together, eating together, celebrating together. One of the more delightful passages of Gropius’ manifesto explains that the Bauhaus will be for “[e]ncouragement of friendly relations between masters and students outside of work; therefore plays, lectures, poetry, music, costume parties. Establishment of a cheerful ceremonial at these gatherings.”

In fact, the early members of the Bauhaus were quite serious about these costume parties, as can be noted in the below picture. Why then, when we think of Bauhaus, do we tend to picture the admittedly soulless architecture of, say, Le Corbusier’s housing complexes or Philip Johnson’s utterly humorless glass office buildings instead of the playful goofiness of the Bauhaus costume party? There are reasons for this, actually, many of them having to do with the later career of Walter Gropius himself. I’ll say more about this in the next essay. But for now, enjoy the extra-planetary whimsy of Bauhaus as it was in the early days, when, as Gropius put it in his manifesto, Bauhaus was all about the establishment of a “cheerful ceremonial.” 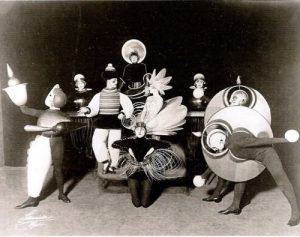