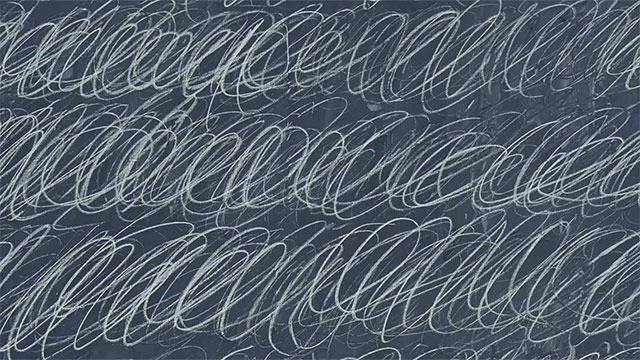 Cy Twombly’s art first acquired its distinctively elusive characteristics when he started using letters and words in his paintings. In a number of his paintings can be found the letter ‘e’. Twombly painted his ‘e’s in a cursive style most of the time, drawn with a freehand nonchalance. The ‘e’s in Twombly’s paintings often look like something you would find in the notebook of a young person first learning to write in cursive. This person is drawing the same letter over and over again in loops in the attempt to get the form of the letter right. Perhaps the child has learned how to make one word and is copying that word over and over again with varying degrees of success.

Letters, in general, are meant to make up words and words are meant to make up sentences and sentences are meant to convey meaning. Breaking sentences back down into individual words and words back down into individual letters has the opposite effect. Meaning is reduced, taken apart, decomposed. Still, the letters and the words contain a lingering residue of the meaning they are meant to lead toward even if they never get there. In Twombly’s paintings, the individual ‘e’s looping off one another across the canvas contain a lot of promise. There is something tantalizing about the fact that they might mean something.

Cy Twombly seems to have enjoyed his stand-alone ‘e’s for just that reason. He liked to meditate on them as such. He liked the potential for meaning permanently forestalled. He must have liked the way, also, that his letter-and-word-scrawled canvases were a jolt to expectations. Paintings are supposed to be of images, while writing is supposed to use words. Words go one place, images go another. But then again, can’t paintings mean something? Aren’t paintings supposed to be more than mere images, more than the mere copying of reality by skilled illusionists? The move to abstraction in the generation just before Twombly was meant to be the confirmation of this fact. Abstract painters made studies in line and form and color in order to drive the point home. They were exploring the forms that make up our visual perception, or the shapes and movements that underlay our experience. Painting is not about representing reality, the abstractionists said, it is about revealing reality’s true nature.

When Twombly scrawled his ‘e’s onto the canvas, he was taking that claim very seriously. Here is something else you can look at in a painting, he was saying. You can look at the elements of language as blocks of pure meaning just like the abstract painters were doing with their studies in pure color or pure form. We get to the essences of things, Twombly was saying. The writers may use language to say things, but the painter can show language in its abstract nature as a generator of meaning. You can’t really read a painting, Twombly realized, so you have to see the language found in a painting on a different register. You have to see the language in a painting as language of painting, and not as letters and words. Even poetry, which can be the purest form of language operating for its own sake, cannot do that. Maybe that is why Twombly often gravitated to the letter ‘e’. ‘E’ happens to be the most commonly used letter in the English alphabet, and in many other Indo-European languages as well. There were fourteen ‘e’s, in fact, in the previous sentence. When Georges Perec, the great Oulipo writer, wanted to set himself the most difficult formal constraint within which to write a novel he finally came up with the idea of writing a novel (La Disparition, or in the equally amazing English translation, A Void) without the letter ‘e’. ‘E’ is, in short, an important letter.

One can imagine that for Twombly there was something satisfying about writing ‘e’s on a painting canvas. He wouldn’t just write them, he would scratch and scrawl. He would write his ‘e’s and other letters as a primal act and as a childlike act. The scratch of letter was a gesture of meaning that didn’t need anything else. This was painting doing language and when painting does language you don’t get a book, you get the essence of the act stripped bare. Sometimes Twombly would just loop a drawn line around and around as if he was writing something but no distinct letters or words ever emerged. A number of Twombly’s “grey paintings” from the late 60s and early 70s were like this. It is said that he would produce them by sitting on the shoulders of a friend and loop lines with his chalk while the friend wandered around in front of the canvas. What wonderful days those must have been. The loops must have felt big and airy, free and significant at the same time, the friend wandering around beneath, the light coming in through the window on a summer afternoon. 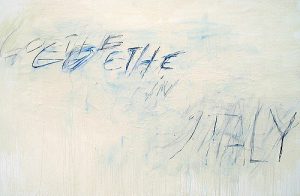 It is no surprise that the most important piece of writing on Cy Twombly is by the French theorist and occasional practitioner of semiotics, Roland Barthes. Semiotics, as the word suggests, is the study of signs. When Barthes was doing semiotics he was decoding the signs of daily life, showing us what things really mean. But when Barthes came to the work of Cy Twombly, the crafty cryptologist, he realized that this would be no simple task of semiotics. Barthes realized that Twombly’s paintings were acts of meaning without necessarily containing any specific meanings. Barthes wrote that, “Words too belong to everybody; but sentences belong to writers: Twombly’s ‘sentences’ are inimitable.” 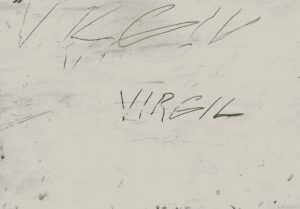 Twombly moved to Europe when he was 30 and lived in different parts of Italy most of his life. That makes sense. Language has a little bit more resonance in Italy because the history goes back so much further. A kid from Virginia would have noticed that. Twombly wanted to be able to throw a word out, or an image, and for that word or image to ripple out in waves of meaning with no clear direction or settling point, but with immense resonance. When you stand at a square somewhere in Rome and simply utter the name Virgil over and over again you’ve already done a lot. Go to Rome, Twombly thought, and scrawl the name Virgil on a wall of an alley somewhere with a dirty pencil and you’ve done it all. What more could you want? You’ve just participated in things so big, so vastly meaningful in their resonance across human civilizations that you were lucky just to participate in that little piece of it. Just scrawling the name on a piece of paper is enough. 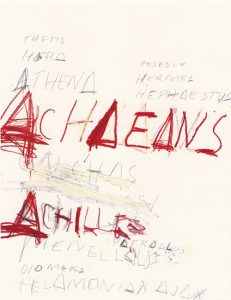 Roland Barthes noticed roughly the same thing about Twombly. “This is why Twombly’s titles do not lead to analogy,” Barthes wrote, “If a canvas is called The Italians, do not seek the Italians anywhere, except, precisely, in their name. Twombly knows that the Name has an absolute (and sufficient) power of evocation: to write The Italians is to see all the Italians.”

He did see all the Italians, I think. Twombly painted canvases of such simple words and root images that the entire story of all human things is probably encoded in there. Maybe there are secrets about the future to be discovered in his canvases as well. I wouldn’t put anything past the old cryptologist. We’ll be looking at his scratches, scrawls and beautiful marks for a long time to come.