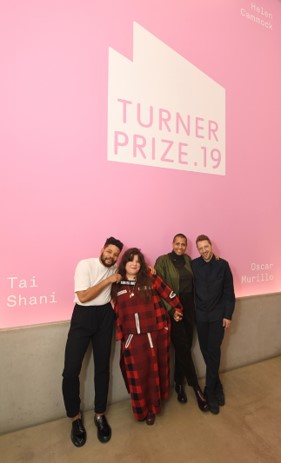 The Turner Prize (inaugurated in 1984) has become arguably the most prominent art prize anywhere. No one is sure why this is the case. The prize, after all, is limited to artists who are British by birth or residency, and Britain is a relatively small place these days, all told. There are other notable prizes in the international art world. The Golden and Silver Lions at the Venice Biennale are important. There’s also the Bucksbaum award, given out at the Whitney Biennial. But the Turner Prize seems to grab more attention in the media than any of the others. Maybe this is simply because there’s still no other press on the planet that can compete with the British press in terms of snap and snark.

The controversy-generating machine that is the Turner Prize found a new way, in 2019, to stir up discussion. Four artists were put on the shortlist: Lawrence Abu Hamdan, Helen Cammock, Oscar Murillo, and Tai Shani. Normally, the judging panel picks one winner from that shortlist. But the four artists got together and decided that they wanted to accept the prize equally, as a foursome. They put out a press release that read, in part:

At this time of political crisis in Britain and much of the world, when there is already so much that divides and isolates people and communities, we feel strongly motivated to use the occasion of the Prize to make a collective statement in the name of commonality, multiplicity and solidarity – in art as in society.

The judges agreed. Predictably, much debate on the relative merits of this decision followed. To be honest, the debate bores me. I have no problem with the 2019 Turner artists sharing the award. But the unintended consequence of this decision has been that no one talks much about the art. The controversial sharing of the award has become the story. So, in response, I’d like to take a small amount of space to say one or two things about the actual work that each of these four artists has produced.

Helen Cammock has stated that “all art is political.” This is a statement that is either meaningless or wrong. Nonetheless, we get her point. We know what she wants, which is that art should mean something. Art should be engaged with the world. Art shouldn’t simply consist of luxury products for the rich. 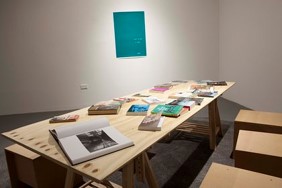 Cammock’s art is constituted by a lot of research and a lot of documentation. She is interested in collecting the stories of people, especially women, who have not always, historically, been heard. She’s interested in marginalization and power. She makes videos and archives and collections of information. There is much work like this in the contemporary global art scene.

Here, though, is why Helen Cammock, in my opinion, is doing something special. She has an instinct for finding actual human beings, real people with real stories, stories that usually involve genuine suffering. Allowing those people to speak, whether on video or in other forms of documentation, creates startling moments of communication and understanding. Aesthetically, we realize that the people we meet through Cammock’s projects can’t really let us into their experience, not completely. So, what started as a project of letting others speak becomes a deeper exploration of the limits of speaking, and of communicating in general. This is what makes Cammock’s work art and not just documentary.

Tai Shani’s art has been described as “feminist science fiction.” Shani makes short films and often quite elaborate installations that include sculpture, music, photographs, dance, and more. The word ‘surreal’ and the phrase ‘alternate history’ often get thrown around when critics discuss Shani’s work. It’s been pointed out, also, that Shani is rather obsessed with the 15th century allegorical text by Christine de Pizan called The Book of the City of Ladies. Like Pizan, Shani is interested in a radical reorientation. What happens when female desire and female trauma become the lenses through which we see the world? 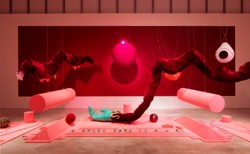 Shani’s answer is that everything changes, even down to our basic assumptions about how stories hold together, how logic works, how we understand ourselves as selves. That’s to say, the very boundaries of rationality break down. When you enter into one of Shani’s worlds, you enter into a place where dream and fantasy constitute the inner, rather than the outer boundary of reality. This can be, you know, rather disconcerting. The typical complaint in the midst of a Tai Shani exhibit is something like the following: “I’m intrigued but I don’t really understand it and that makes me uncomfortable.” Well, yeah. That’s pretty much the point. Should art be able to do this, to push us this far? Yes, it should.

Oscar Murillo is Columbian by birth and a painter by vocation. Painting, as everyone knows, is dead. Except that it is not. Actually, like most contemporary painters, Murillo also does multimedia works, performances, etc. He famously recreated a chocolate factory from his hometown in Columbia inside the David Zwirner gallery in New York. He even brought actual chocolate factory workers from Columbia to work in the factory/installation. 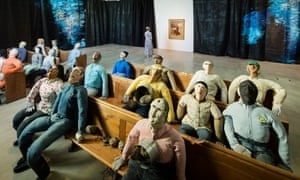 We endorse such transformations of New York City galleries. But still, with Murillo it comes down to the paintings. Everyone more or less agrees that they like the paintings of Oscar Murillo for the reason that the paintings have nice colors and lots of movement and shapes and bits of text and whatnot. Of course, there are hundreds, maybe thousands of painters who have been mucking about in the world of painterly abstraction-post-abstraction since the late 1940s. Why do Oscar Murillo’s paintings delight the eye and mind more than so many of these others?

Well, I’ll be honest. I don’t think we can say why. Some will say that this is a problem. Some will wring their hands at the fact that we don’t really know why Murillo’s paintings are so good when other stuff very much like it is not. But this mystery does not bother me at all. It is the mystery at the very core of why painting still continues in 2020, in the midst of all its wreckage, in the shadow of the breakdown of every medium. This mystery is wonderful, as are the paintings of Oscar Murillo.

The main thing about Lawrence Abu Hamdan (originally from Amman, Jordan) is that he is a listener. He’s an ear man. That’s unusual in the visual arts, which tend to be visual. More about that in a moment. The other important factor in Hamdan’s work is what he listens to. He listens to things that are otherwise hard to hear. He listens, for instance, and quite carefully, to the accounts of prisoners who were tortured in the Saydnaya Prison in Syria. Or, more whimsically, he listens to the crinkly sounds made by bags of potato chips, which he distributed freely to visitors of the Armory Show in 2015. 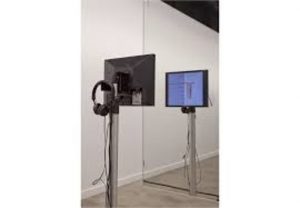 Of course, the noisy bags had an interesting kickback. That’s because the bags were not just noise-making objects, they were also being presented as listening devices. It so happens that MIT researchers have discovered that the shiny surfaces of objects like potato chip bags can, when captured by high-speed video, record conversations happening nearby. I don’t really understand how it works either. But the point is that it does, which foretells a world in which we are being listened to all the time, by everything.

But back to the question of hearing versus seeing. Saydnaya Prison is not a place we have access to, at least visually. It’s a place shrouded in secrecy, for obvious reasons. So, the only way to get access to it is through the accounts of the people who spent time there. Hamdan took all of these accounts, the stories and memories of the people held and tortured in the prison and attempted to recreate the architecture of the space through those verbal accounts. The question here, aesthetically, is the degree to which sound is just as real as anything else. Again, we tend to privilege the eyes, especially when it comes to the physical realm. But must it be this way? Is there a way in which sound comes first? Or, perhaps more interestingly, how does our sense of the world change when we reconstitute it first through sound. What is the world of sound? The political and ethical importance of Hamdan’s work with listening goes without saying. But it is these aesthetic questions that make it compelling art.