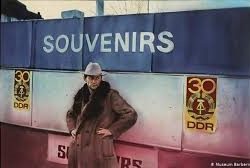 From Impression to Expression; Martin Kippenberger at the Bundeskunsthalle

Kippenberger constantly satirized the German art establishment, partied to excess and died early with a small reputation. Now it’s big. His paintings were peppered with references to consumer culture – prompting some to use the term ‘neo-Pop’ – which he promoted using his own celebrity. This writer thinks Kippenberger’s work shared little with Pop – “despair behind the façade of the cynical joker”. An illuminating interview is here.