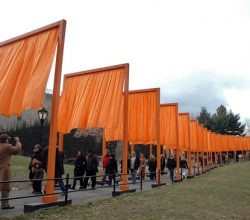 How ‘The Gates’ Triumphed Over New York’s NIMBYs

An appreciation of the 2005 The Gates project of Christo and Jeanne-Claude. Bureaucrats initially declared it “the wrong project, in the wrong place, at the wrong time.” Fourteen years later it was realised. “The gates were … a live civic spectacle, proof that a vision could serve as a beacon to the public commons. Witnessing the gates as a visitor felt peaceful — even underwhelming. It was supposed to be.”