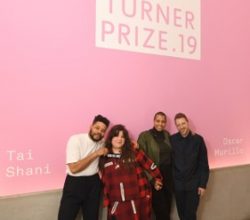 The four shortlist nominees for the 2019 Turner Prize requested that the prize be shared equally “in the name of commonality”. “Excited” by this request, London’s Tate complied. More than a few critics are furious. For some it’s the political nature of the art involved. For others, it’s the political correctness of sharing the prize, one describing it “a virtue signal for the snowflake era”.

Amidst the furor, Morgan Meis has managed to remain calm. “To be honest, the debate bores me. I have no problem with the 2019 Turner artists sharing the award. But the unintended consequence of this decision has been that no one talks much about the art.” His short review puts that to rights.