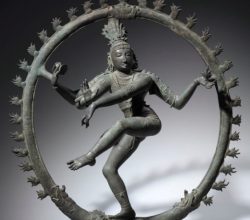 Appreciation of an 11th century devotional statue of the great Hindu god Shiva. Here, he takes the form of Nataraja, the cosmic dancer. “His right foot crushes a demon. In his right hand he holds a drum — its boom represents the resonance of creation itself — and in his left, fire, which ravishes the world. His dance feels like an act of gymnastic brilliance … with nothing but his own miraculous powers of balance to stop him falling away into nothingness.”